On March 20, 1980, Mount St. Helens experienced a magnitude 4.2 earthquake;[2] and, on March 27, steam venting started.[26] By the end of April, the north side of the mountain had started to bulge.[27] On May 18, a second earthquake, of magnitude 5.1, triggered a massive collapse of the north face of the mountain. It was the largest known debris avalanche in recorded history. The magma in St. Helens burst forth into a large-scale pyroclastic flow that flattened vegetation and buildings over 230 square miles (600 km2). More than 1.5 million metric tons of sulfur dioxide were released into the atmosphere.[28] On the Volcanic Explosivity Index scale, the eruption was rated a five, and categorized as a Plinian eruption. 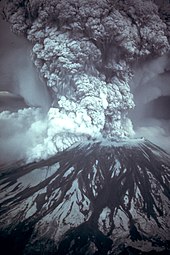 The collapse of the northern flank of St. Helens mixed with ice, snow, and water to create lahars (volcanic mudflows). The lahars flowed many miles down the Toutle and Cowlitz Rivers, destroying bridges and lumber camps. A total of 3,900,000 cubic yards (3,000,000 m3) of material was transported 17 miles (27 km) south into the Columbia River by the mudflows.[29]

For more than nine hours, a vigorous plume of ash erupted, eventually reaching 12 to 16 miles (20 to 27 km) above sea level.[30] The plume moved eastward at an average speed of 60 miles per hour (100 km/h) with ash reaching Idaho by noon. Ashes from the eruption were found collecting on top of cars and roofs the next morning as far as the city of Edmonton in Alberta, Canada.